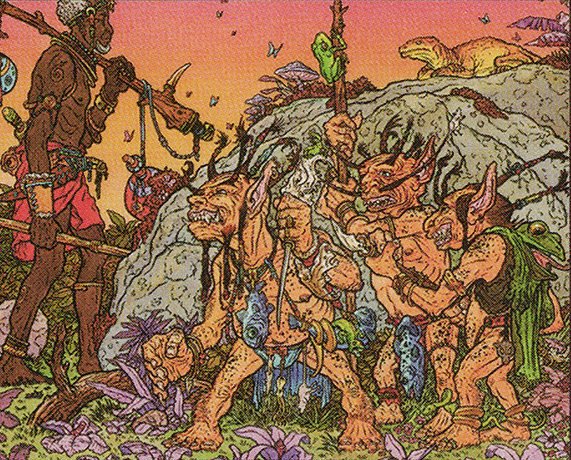 This story begins one night in November of 2011, when my first daughter was born. After her, three more would come. Two girls and two boys. My good friend Jairo Gómez told me they were Zerglings. But this is a magic article, not a Starcraft one, so maybe tokens is a better term.

The more children you have, the less time you have for your hobbies. Free time to dedicate to Magic is scarce; and Magic is a demanding mistress. I’ve been married for ten years and have had kids for nine. Before that, I went to medical school. If you add it all up, it has been almost seventeen years -maybe more- without being able to devote myself to the game as I did in high school.

Expect my visit when the darkness comes. The night I think is best for hiding all

Like big, bad uncle Juju off a Dark Ritual, kids sneak up on you when you least expect them. The youngest one still literally does that, using every possible excuse to sleep with her parents every single night. However, like with the old Djinn, I have found them to be a bunch of unexpected magic companions.

My playtest proug are nine, seven, six and three years old. None of them knows the game rules well. Perhaps they understand that each player has a turn and you get to draw a card at the beginning of each one. Age recomendation: 13+. The older one understands something about the structure of a turn, but not in a very deep way. Therefore it is valid to ask yourself for the interest of a child for this card game. ANd the turth is simpler than it seems: a young son wants to be with his parents all the time, even if that means interrupting everything that I do, trying to eat whatever I have on my plate, or deleting an entire paragraph of this article while I sneak for a quick toilet break. A kid’s strategy, is to disrupt yor initial game-plan by adding onto the stack interruption after sweet interruption. Parents have to learn that these interruptions are the new way the game is played.

Whenever my kids see me organizing my collection, they beg me over and over, over and over, to play Magic with them. But it is not the dynamics of mathematics, color-pie or the fantasy artwork that attracts them. It could be Monopoly, mud or even Pokemon. Their reason for being is, at this point in their lives, to be with their parents.

My games of Magic with them start by shuffling two or more decks together, regardless of the amount of players. Two, three, maybe four players? It doesn’t matter, mix-em up, then redistribute. Starting life total depends on how rushed I am to put them to bed or answer emails. I deal seven, and we’re off to the races. I act as a master of ceremonies of sorts, but I let them try to figure some of the stuff by themselves.

The funny thing is how easy they become obsessed about a single detail. One, only likes slivers because they look like dinosaurs. Another one became obsessed about Jund for an entire week because he really enjoyed having a large and invinsible Tarmogoyf that costs so little. Another one’s mind got blown whe he played a turn three Karn with natural Tron. Five or six games can go by without them understanding very well why the miracle that captivated them has not repeated itself. One of my conclussions is that young children really enjoy playing, even if the rules of the game don’t make much sense. They do not suffer for the land-drop they missed, nor it hurts them to wait two or three more turns to cast a Serra Angel. They just enjoy the ride.

I have also learned a few things about Magic and its mechanics by playing with my kids. After playing over five hundred games with them, the most important thing I learned is that those who are really great at Magic are a very small group of people. My respects towards them. Why am I saying this? Perhaps there is worth going back in time and doing some psychoanalysis. When I started playing the game, I thought that every single match could be won. The Fate cointained in your initial seven cards could be twisted by a series of smart and hidden decisions. Now I know that there are many games that I cannot win. They were already written. I saw it in games with my kids where I had to decide all the best options for each player, and I realized that some fates cannot be eluded. Some games are lost because of plain mistakes, unforgivable oversights, lack of flexibility and poor reading of particular situations. Sometimes you can do everything perfecly and still lose. Variance. When I see my friends consistently achieve good results, I cannot but conclude that they see a margin that I will never be able to notice. So, I decided that it is better to side with my children, and accept that from time to time the miracle happens: that the combo doesn’t fizzle, that the illusions of grandeur drains 20 lives, that Marit Lage manages to cross a Wasteland.

Playing Magic with my kids has also taught me that the things that you love demand attention, and while I cannot dedicate the time to the game itself, I still strive to give as much time as possible to the lifelong friends that this game has brought to me.

I want to end by saying that it is very important to understand the cliché that all people are different. Playing Magic with my children is great evidence of that fact. Because these four children, children of the same parents, educated more or less in the same way, are totally different people. The first one tries to be perfect; the second one is happy with simply being there in the moment; the third one is an evil genius that’s analyzing my every move, and the fourth one only wants to live disguised as a dragon. As they grow, they change (except for that last one, which is still disguised and scribbling the walls with sharpies). But I am clear that the cycle of life will perpetuate itself once more. These children will grow and perhaps I may have more time for this community again. Maybe one of my kids will accompany me to a tournament. Maybe the evil genius will discover the value of my cards and will sell them in eBay.

We’ll see what comes around the corner. Is that a black Juzam who laughs at me? Doesn’t seem. In the meantime, I will continue to wait on this joyous children’s night, playing the game in their own way and learning from our mistakes.